Recently, the Hog Roast Olney team were hired by Andrew for his event. The venue he had chosen for his event was the Foresters Arms in Bedford. All of the food was cooked at the venue and the team arrived at the venue several hours before the serve time so they could ensure that everything would be ready on time. The dishes were spread out beautifully along the professionally laid buffet table and the meats were served in heated metal trays so that they were kept hot and tender as the room was open to outside. 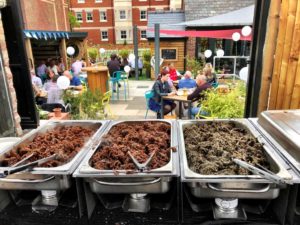 The client selected the Southern Slow Roast menu for the Hog Roast Olney team to serve to his guests. The menu featured a selection of spiced meats which had been inspired by American cuisine from the southern states. The selection of meats included Texan 24 hour beef brisket, fall off the bone Louisiana sticky pork ribs and Creole pulled quarter of spiced lamb. A selection of American styled sides included Memphis style crunchy coleslaw, Greek salad, corn cobettes, seasonal green leaf salad and Cajun spiced sweet potato wedges. A vegetarian alternative to the meat of lightly grilled vegetable and halloumi skewers which were served with pitta breads and a tzatziki dip was also served.

The Hog Roast Olney team served their buffet from 2:30pm onwards as an afternoon service at the venue. The buffet was for a large number of 150 guests who all appeared to really enjoy the buffet service. The food was served on disposable crockery which was served with disposable cutlery and napkins. The used crockery and cutlery was all taken away by the team discreetly once the service had finished. The service was delivered by the Hog Roast Olney team’s chefs, Ben and Beth, who ensure that all of the food was cooked to perfection and that it was all ready on time. The pair were really proud of the service they delivered and were really happy that they made Andrew’s event a success. Andrew was really pleased with the food and the service and would definitely hire them again.