Ourselves at Hog Roast Roade are familiar with catering for anniversary occasions, particularly milestones however last Sunday was our very first time providing delicious food for a double golden wedding anniversary! And what a spectacular day it was.

Sisters Mary and Linda married within 2 weeks of each other in Northampton in 1967, and together with their wonderful husbands they had decided to host a large party to celebrate both of their 50 year long marriages with all of their family, friends and neighbours. The party itself was held at Mary’s home in Roade, to the rear of the property where she has a beautiful garden with a large patio area which she explained to me has often been the location of many large family get togethers and barbecues over the years. Mary and Linda had both agreed on a laid back and casual party with plenty of drinks and tasty yet simple food – and that is where we come in! The sisters had asked us to prepare our classic hog roast menu of our spit roasted free range pig which we roast slowly for several hours over flickering open flames. We then carve the tender meat and serve on fresh, floured bread rolls, topped with guests choice of homemade apple sauce, freshly cooked sage and onion stuffing and our delicious, crunchy crackling. 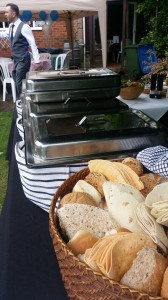 Mary’s garden had been decorated with an abundance of anniversary themed balloons, banners and a lovely table area where we were able to serve the Hog Roast Roade. My favourite decoration of all though had to be the lovely display of wedding photos of both couples from over the last 50 years which was also a hit with their guests. As family and friends laughed, chatted and danced we began to serve our food buffet style, with our professional serving staff presenting the hot food and allowing guests to help themselves to as many condiments as they could manage. Our mouthwatering crackling as ever was particularly popular! Congratulations to both couples on their amazing golden wedding anniversary from everyone here at Hog Roast Roade – it was delight to be a part of your special day.