Despite the miserable weather, we had a great time catering for a lovely family party yesterday. To celebrate recently moving back to this country to be nearer to their family, Jack and Marilyn booked us for a party in their garden and boy did it rain for most of it. Nevertheless, we had our gazebo up on the patio, and roasted a nice, fat pig underneath, although most of the guests ended up inside to eat and to catch up with each other due to the downpour. 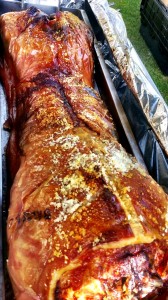 The couple have lived abroad for many years, moving from country to country for work, and decided it was time again to put down some roots here in the UK. Having tried a hog roast for the first time in Australia and loved it, they decided this ‘welcome home’ party should feature some kind of spit or hog roast in Crick this time, and we agreed of course, and left them to decide which it should be. Jack wanted to try a spit roast (which they hadn’t had before) and Marilyn wanted to stick with what they had tried before – a hog roast. As you may know already, a spit roast has the pig (or another animal if you prefer) fixed to a pole which turns while it cooks, while with a hog roast it doesn’t turn – rather, it sits and roasts in a tray and produces succulent meat that just falls off the bone. When they called us back with their decision of a hog roast, they said that if they were happy with our food and catering service, they would promise to hire us for a spit roast for their next party.

So yesterday we arrived at the couple’s new home, armed with a 40kg pig to roast, and set up the equipment just in time before the heavens opened. Jack and Marilyn were worried that their roast would be a disaster, but we’ve catered for many events throughout the year, in all types of weather, often cooking the food outside and then moving it inside to serve. On this day, we managed fine cooking and carving outside, and as the gazebo was right next to the conservatory, the guests could get to their hog roast sandwiches without getting at all wet.

Before we left, Jack booked us for a spit roast next month, so we guessed he was certainly happy with our hog roast in Crick!